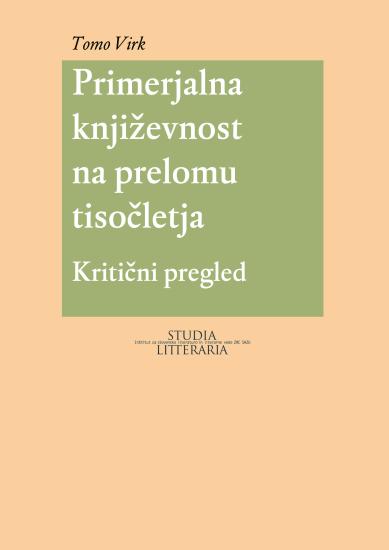 
In a comprehensive and at times critical manner, this volume seeks to shed light on the development of events in Western (i.e., European and North American) comparative literature in the past two decades. It is divided into two parts: part one tackles disciplinary self-reflection, starting from the first half of the 1990s onwards, and especially focuses on the “crisis” of comparative literature. The second part focuses on particular fields of literary studies (literary theory, literariness, otherness, translation, literary history, and world literature), seeking to demonstrate they are a special domain of comparative literature.

The discussion perceives a partial digression from this tendency in another recent infamous work on comparative literature; namely, Gayatri C. Spivak’s book provocatively titled Death of a Discipline (2003; based on lectures from 2000). This work is controversial in many respects because in its introduction (and only there) it predicts the death of comparative literature and its collaboration with cultural studies. On the other hand (even in the debate over The Bernheimer Report), it opposes the merger of comparative literature into cultural studies and (again in strong opposition to The Bernheimer Report) advocates research on literariness as a specific domain of comparative literature. The book of Bengali comparativist points towards a new paradigm shift in the humanities – namely, the “esthetic turn.” Its features are also visible in Saussy’s American Comparative Literature Association report from the following year (2003). Here, there are much more moderate views on contextualization, and in particular Saussy supports the autonomy of the discipline and argues for the study of literariness as one of its main tasks. The discussion tries to illustrate how these changes are also taking place under the influence of wider social movements, especially globalization, which poses new challenges for the humanities. Particularly comparative literature with its disciplinary specifics should therefore have fewer problems with social legitimization than a decade before. The rehabilitation of universality is also one of the central indicators of methodological changes in comparative literature. This concept was strongly rejected by comparative literature in the past few decades due to its hegemonic pretensions and Euro-centrism; however, its revitalization (in a more purified form) has proved its necessity, in particular within the framework of globalization. Globalization itself demands the manner of thought that perceives one subject as a part of a multitude of other subjects, sees uniformity in diversity; in other words – as Latin American comparative literature puts it – the dialectics of local and global, universal and partial, or, more specifically, in a language of intercultural hermeneutics, also defended by this paper – the position of in-betweenness and mediation. The thematization of this in-betweenness – as a response to unilateral relativisms and essentialisms – seems to be the priority task of comparative literature within literary studies.

A chapter on literary theory follows. Due to its principle-based universality or transnationalism, literary theory was the focus of research in comparative literature, at least in the 20th century, if not from its very beginnings. The chapter first sheds light on the terminological problem; from the 1970s onwards in English-speaking countries, the term “literary theory” (or simply “theory,” but in the context of literary studies or comparative literature) was used to denote theoretical currents that do not have much in common with traditional literary theory; for example, Marxism, structuralism, Lacanianism, particularly deconstruction, and so on – in other words, that which can be more appropriately termed “methodology” in the context of Slovenian (and partially German) terminology. The discussion proposes a more precise distinction between both terms of “literary theory,” and later focuses on defining its place in modern literary studies and comparative literature. In this area, too, it faces the question of “the death of the theory” and suggests that literary theory’s applicability for research in all domains of the literary field should be the decisive factor for determining the validity of a particular theory, be it modern or traditional. The conclusion of the chapter states that comparative literature should take into consideration and make use of theories of literature provided by different disciplinary discourses, but should at the same time (and especially) develop its own, autonomous literary theory, specifically adapted to its basic object of research.

The chapter on literariness deals with a topic that became extremely controversial during the 1990s; at the same time, as the paper seeks to demonstrate, it is obvious that it must remain one of the central research domains of comparative literature as literary studies. Various approaches and ways of understanding literariness are possible, as well as two extreme viewpoints: the essentialist view, which understands literariness as a merely immanent, objective, unchangeable character (an “essence”) of literary texts; and the relativistic view, according to which literariness is only a construct, a consequence of a particular attribution from the “outside.” The paper defends a middle way, illustrated by the comparative theory of invariants (Etiemble, Fokkema), according to which at least a minimal identity is conserved in the contextually dependent diversity of particular (literary) phenomena. Literariness is therefore on the one hand partially understood as the “immanent” characteristic of literature; however, the chapter concludes with the observation that literature with its literariness is always entangled in an actual (cultural, historical, social, ideological, etc.) context, so that literariness is understood and formulated somewhat differently every time.

The extensive chapter on literary history focuses on the complex problematic of modern comparative literary history. Comparative literature was in its origin conceived of as a study within literary history, which remains one of its priorities today. In today’s context of globalization in particular and findings on transnational links between literary phenomena, best contributed to by the theory of intertextuality and reception esthetics, it has become clear that the role of comparative literary history with regard to the nature of literature is becoming increasingly important compared to national literary histories, which predominated just a few decades ago. In the 1970s, the International Comparative Literature Association conceived a vast project on comparative literary history, which has undergone constant conceptual change. The most radical changes were wrought by some of the most innovative products of the project, particularly the literary histories of Latin American and Eastern-Central European cultures. These two projects – along with some other, conceptually related ones (e.g., Hollier’s A New History of French Literature) – are based on certain new historiographic principles; for example, the relativization or rejection of principles of linearity, the continuity, and teleology, the collapse of “great narratives”, and so forth. The discussion first thoroughly examines these new historiographic concepts, especially the clash between their theoretical breakthrough and their potential for practical realization. It advocates the necessity of conceptual renewal, although when these renewals become too radical their transfer into the concrete practice of literary history can be questionable and even conterproductive. It points to historicity as the basis of human existence, which defines all human perceptions of reality and its manifestations, even past events, as a time continuum. This is therefore not only an ideological construct subjected to different interests of power (although it can of course be abused for these purposes), but more of an a priori condition of every historical discourse, even discourse within literary studies or comparative literature. The chapter briefly analyses the advantages and drawbacks of new concepts of literary history and advocates pluralism in this area, “pluralistic” comparative literary histories, which could shed light from various viewpoints on particular “objects” or circumstances, including of course the supposedly controversial traditional positions.

Universal (economic, cultural, informational, etc.) globalization has in some way created a new interest in world literature. In the second half of the 20th century, world literature was practically abolished from comparative literature – the term “universality” was done away with for similar reasons, namely because of (alleged or actual) Euro-centrism, false humanism, imperialistic hegemony, and so forth. This chapter presents three possible ways of understanding world literature (the qualitative, quantitative, and “communicative”) and then goes on to explain Goethe’s concept of world literature. In doing so, it faces its surprising modern applicability (it is therefore no surprise that Homi Bhabba, one of the most important post-colonialism theorists, modernized it in his own way). In the historic overview of the development of the concept, it touches upon Strich’s and Auerbach’s understandings and draws attention to the most important achievement in this direction: namely, the concept of world literature as a final goal of interliterary research in the Slovak comparative school of Dionýz urišin. It primarily focuses on three modern approaches; namely, those of Franco Moretti, Pascale Casanova, and David Damrosch. Moretti’s approach is accompanied by the critical question of “distant reading,” which Moretti believes is the only possible way to conceptualize world literature because it is not possible to present it as an corpus of particular authors or works, but rather as a system of given structures or rules of the literary field. Pascale Casanova’s concept of “The World Republic of Letters” brings with it the interesting notion of a relatively independent literary field, but what is more controversial is the actual execution and the author’s barely disguised “Gallo-centrism.” The most promising – and the closest to Goethe’s idea – is Damrosch’s concept of world literature, which includes works that have had a “transnational” fate for various reasons and, by surpassing the boundaries of national literatures, become works of world literature.

The final chapter attempts to pithily sum up the central idea of the work. It addresses the identity of comparative literature and demonstrates how this identity – like, for example, the concept of literariness – has been constantly crossed with varieties, diversities, and disparateness whether they manifested themselves as a multitude of comparative “schools,” as the plurality and diversity of methodological approaches, or as the changeability of various ideologies (as well as scholarly and paradigmatic changes). It demonstrates how all these differences are inevitably contextually conditioned, and ascertains at the same time that the view of comparative literature in its context-surpassing “identity” should not be hindered. This is why it proposes that comparative literature be thought of as one and at the same time as a variety; as an invariant discipline, drifting in constant, contextually-bound changes; as a multi-perspective polilogue where minimal identity does not arise from a given postulate, recipe, or obligatory rule, but rather from the “natural” subject of the discipline that bears the name comparative literature; a discipline that is neither universal nor merely partial, local, and contextually-bound, but instead plural. Comparative literature best suits the mediating “essence,” described in this book on several occasions and accepted consensually in modern comparative literature, by opening once up again to its somewhat forgotten hermeneutic basis. When “comparing” (this expression is still in its name) various literatures or literary works (or their literary contexts), it should try to behave as (inter)cultural hermeneutics by exposing “what is in the middle, that which mediates the profusion in the passage between one’s own and the foreign” (Komel 2002: 137). It is the concept of (inter)cultural hermeneutics (which has best helped define literariness on the basis of the concept of otherness) that seems the most appropriate for formulating those characteristics of comparative literature constantly outlined by this discussion; namely, that it acknowledges the differences, not renouncing the moment of identity, but instead thematizing the question of the “middle,” the non-reflected intermediateness, implied by Husserl’s concept of the life-world, and postulated by Heidegger in Identity and Difference.