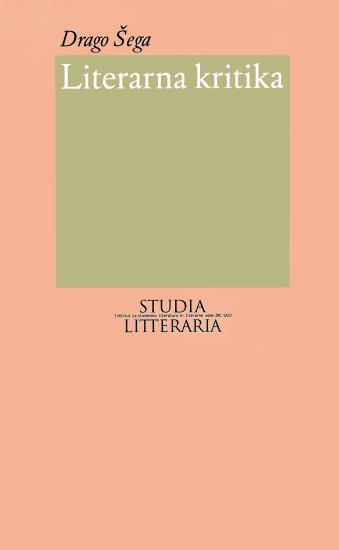 
The book consists of three parts, which discuss the terminology, the genesis of literary criticism and the various theoretical views of it.

The author initially ascertains that the terms denoting literary criticism in individual national-linguistic and cultural-historical traditions are divergent in their meaning. He therefore begins his discussion with an examination of their etymology and seman¬tics; primarily he researches in detail the term ‘criticism’ and its synonyms, as well as its rivalry terms, as they appear in the Anti¬quity and then from the Renaissance to the present, that is, from classical Greek and Latin, and later modern-age Latin to French, English, German, Italian, Russian and other Slavonic languages, as well as Slovenian. Through a terminological review, it is pos¬sible to identify the different historically attested meanings and uses of the term ‘literary criticism’ and related words in various periods and environments. Within this context of historical con¬cepts, a more precise description of what the term ‘criticism’ en¬compasses is also given, as it prevails in the Slovenian tradi¬tional and in contemporary use, without the inclusion of the scientific approach to literature; it is parallel to that of German and certain other Slavonic literatures, and is therefore narrower in meaning than its English or French homonyms.

This review of terminology and historical concepts is the basis of the outline of the genesis of literary criticism. It developed as a specific, independent type of approach to literature only at the turn of the 19th century. Its components, however, can be found at the very beginning of European literary and cultural history. The study discovers and characterises the elements of analysis, judgment and evaluation in various early forms of rational approaches to literature — in poetics, rhetoric, philology, philosophy — and through a historical outline (from classical Antiquity and Hellenism through to the Middle Ages, and in more detail particularly from the Renaissance to the enlightened Classicism and Pre-Romanticism) links them together into lines of development, which in the age of Romanticism, bring about the forming of literary criticism. It is at that time that it establishes itself as an independent activity or a special sphere, different from literary history, literary theory and philosophy of art or aesthetics. Paradigmatic of the developmental stage it reached are the two models of literary criticism, established by Friedrich and August Wilhelm Schlegel.

Further development of literary criticism is covered through typological aspects, which arise from its basic relationship to its subject matter, literature. According to the three central points of the literary-artistic process, that is, the author, the work and the reader, the activity of literary criticism as a whole is divided into three groups: 1. biographical, psychological and psycho¬analytical criticism is concerned primarily with the author; 2. im¬pressionist criticism is based primarily on the reader's or critic's reception of a literary work; 3. immanent criticism focuses di¬rectly on a literary work itself. The study typologically defines each of the groups and their typical inherent problems, and presents them in short within the course of history of the past two centuries; it also briefly touches upon their open, at times more, at times less, disputable or compatible relations to con¬temporary literary science and its theoretical suppositions.

What the three groups have in common is that they analyse and evaluate literature according to its autonomous status and intrinsic definitions. There is also another type of criticism, which judges literature according to its relations to the real historical or social world, and according to the functions it per¬forms in this world. The difference in the basic orientation between the two groups of critical activities, however, is such that only the first one is justifiably called 'literary criticism’.

price
not for sale