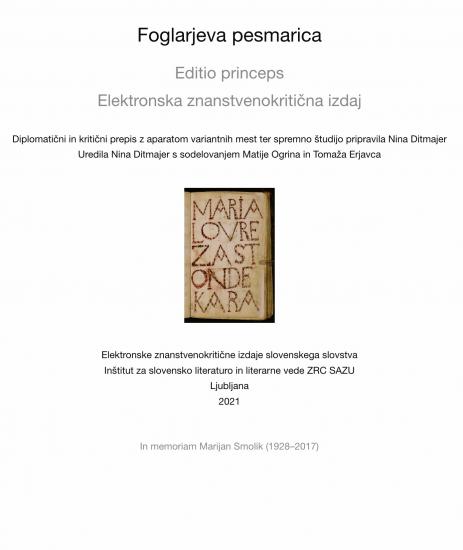 
Foglar’s manuscript is a Baroque pilgrimage hymnal composed in Lower Styria between 1757 and 1762. It is the oldest known manuscript hymnal written by the Styrians, and also contains the first known Slovenian Maria Zell poems. The scholarly digital edition presents the manuscript with the following main elements: the digital facsimile represents the documentary source of the entire edition, guaranteeing the authenticity of the transcripts as well as the critical apparatus and interpretations given in the notes and study; the diplomatic transcript presents the text of Foglar’s manuscript with all of the historical textual peculiarities, including errors; a critical apparatus is added to the diplomatic transcript, which includes variants of some versions of the poems, preserved in eight manuscripts and printed Slovenian hymnals of the eighteenth and nineteenth centuries; the critical transcript presents the text of the manuscript in an adapted, readable image, as faithful as possible to the supposed historical saying – it is a linguistic interpretation prepared according to considered linguistic principles; the appendix contains, in the first place, a list of manuscripts and prints according to which the critical apparatus of variant sites is made; this is followed by a scientific commentary explaining the circumstances of the creation of the manuscript, linguistic and literary peculiarities, and the editorial principles of the transcript.