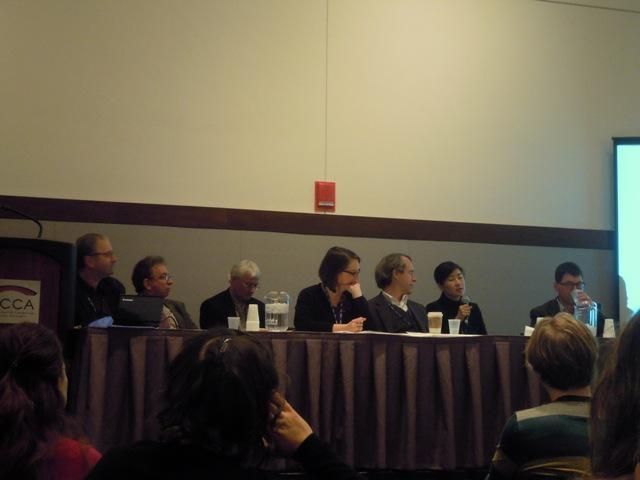 As part of the 128th Annual Convention of the Modern Language Association (Boston, 3–6 January 2013) – a giant event usually attended by around ten thousand (mainly American) professors, researchers and teachers of modern languages and literatures – Marko Juvan organised and led a round table on Perspectivizing World Literature. On the last day of the Convention, this round table managed to attract nearly one hundred listeners. The starting point of a 75-minute discussion was the idea that the world literature as a ‘glocal’ network is produced, distributed, perceived, used and canonised through multiple geo-cultural perspectives. Panelists attempted to provide answers to the question of how the actual literary practices (imperial, metropolitan, peripheral or transnational) were positioned and circulated in the asymmetrical system of world literature. They also addressed the problem of studying literature’s globalism in a properly comparative perspective.

After Juvan’s introductory explanation of the paradox that a pluralistically perspectivised world literature is always already overdetermined by systemic asymmetries, seven panelists presented and exchanged their views. David Damrosch (Harvard), now a leading theorist of world literature, reflected on the periodisation of world literary history; Theo L. D’haen (Leuven), author of the Routledge Concise History Of World Literature, and Jeanne E. Glesener (Luxembourg) dealt with the situation of small European literatures in the world literary system; Sowon S. Park (Oxford) used the notion of perspectivism to highlight literary effects of Pan-Asian imperialism; Galin Tihanov (London) located the notion of literary exile at the intellectual intersection of romantic nationalism and cosmopolitanism; Kristine Kotecki (Austin) demonstrated, on the case of Sarajevo’s resistance poetry, how texts in global circulation become aesthetically reframed; and Steven Tötösy de Zepetnek (Boston) outlined the clashes between the disciplines of comparative literature and world literature. Contributions to the roundtable will be published in the December 2013 special issue of CLCWeb: Comparative Literature and Culture, which will be edited by Marko Juvan.