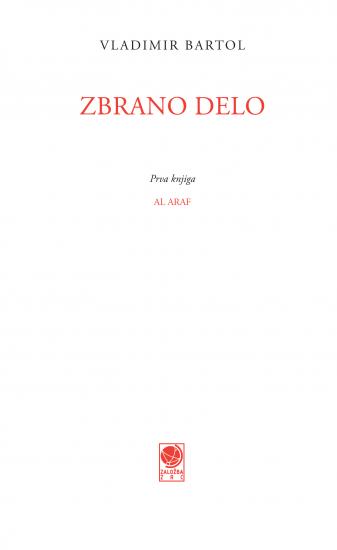 
Vladimir Bartol (1903–1967) began his career as a writer in the second half of the 1920s with the journal publication of short prose, the area in which he was to make his most important contribution to Slovenian literature. His first book was the drama Lopez (1932), but it failed to establish him firmly as a writer. His second and much more important work was Al Araf (1935), in which he published a selection of short narratives, only including works that he judged to be of the highest quality. The response of his contemporaries to the book was mixed, and generally not as favourable as Bartol had expected. In fact, Bartol’s work only achieved genuine recognition after his death. In a somewhat reorganised edition of the short stories from Al Araf published in 1974, Taras Kermauner named Bartol as a forerunner of Slovenian modern prose, while Janko Kos, in his discussions about postmodernism published more than two decades later, claimed Bartol was a predecessor to Slovenian postmodern prose. Collected Works begins with the publication of the prose selection from Al Araf, which was the author’s first important work and, in the opinion of certain literary historians, his most perfected literary work in a literary-aesthetic sense. This first volume presents the text from the first edition of the book, somewhat refined in terms of language, accompanied by all of the critical apparatus that are characteristic of the collection.