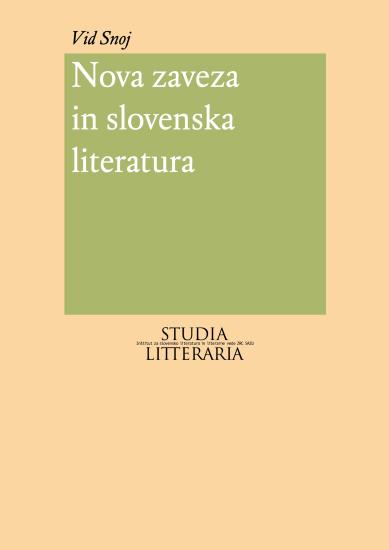 
The book is divided into two parts. The first part consists of a hermeneutical introduction which questions the possibility of viewing the New Testament and Slovene literature in a mutual relationship, since the New Testament is not considered a traditional subject of literary studies and its literary status is therefore not guaranteed in advance. The introduction attempts to elucidate the relationship and establish grounding for the discussion that will unwind within the framework of Literaturwissenschaft.

Hence, the introduction develops a hermeneutical understanding of the New Testament as a literature which largely follows the thought of the French philosopher of hermeneutics, Paul Ricoeur. If the Bible on the whole can be defined, from the aspect of literariness, as a testimony that bears witness to special events, to encounters between God and man, which means that it tells of the glory of God in human history, to whom, as a wholly Other, it also gives revelational shape, then the New Testament within the Bible can be seen primarily as a testimony of “the Christ event,” of the encounter of God with man in God-man and of the encounters between God-man and man. According to Ricoeur, the New Testament is, especially in its central evangelical part, a testimony (martyría) of this unique event, simultaneously a narration (diégesis) and a confession of faith, i.e. a narration-credo about Christ’s life, passion, death on the cross, and resurrection.

The second part of the book consists of readings of selected authors from Slovene literature. These readings may be a close reading of works, or of lines and passages in them, which are in some way connected to the New Testament, yet may also focus on the main themes of a work or opus of a particular author, and develop along the thematic threads extending even beyond the framework of the opus. They are further divided into “larger” and “smaller readings,” the main difference between them being not so much the method of reading as their scope. The larger readings are dedicated to France Prešeren (1800−1849), Ivan Cankar (1876−1918) and Božo Vodušek (1905−1978), while the smaller ones dwell on Anton Aškerc (1856−1912), Josip Murn (1879−1901), Anton Vodnik (1901−1965) and Edvard Kocbek (1904−1981) (with the exception of Simon Gregorčič, whose relationship to the Old Testament is treated in the appendix).

The reading of Prešeren as the first of the larger readings is mainly concerned with his particular application of biblical terms and images. Prešeren decontextualized these terms and images, transferring them to the human condition, to an image of man which, after the Christian image of the world had fallen to pieces, became obscure. They therefore act as metaphors providing man with shape, but not with value: it is, on the contrary, man’s own value that is revealed in a shape newly brought to him by means of biblical metaphor. In Prešeren’s poetry, this procedure is most evident when he celebrates a beloved woman. To herself, her overwhelming presence, he transfers no less than “glory,” which in the Old Testament means the radiant presence of God in the earthly realm, whereas in the New Testament it is the presence of God in the heavenly realm. Prešeren’s secularization of the Bible thus culminates precisely in this metaphorical transference, establishing a paradigm of high love poetry in Slovene literature. That Prešeren’s glorification of a beloved woman is indeed marked by secularization is revealed in a comparison with Dante. While Dante uses the glorious female figure as a figura, or týpos, in the sense of the New Testament typology, leading beyond itself to the presence of God, Prešeren establishes the woman seen in radiant glory not as a representation of God’s present or her own future glory, but as the final aim of his erotic wish.

Since the main theme of Cankar’s opus is that of yearning, its reading begins with an attempt to define the sense of yearning in the New Testament. As God, according to St. Paul, “gives life to the dead” and “calls into existence non-beings as beings” (Rom 4:17), yearning follows this call, ignoring the division between the living and the dead which the world respects, and has a para-ontological sense. In Cankar’s early and mature works, however, this para- or meta-ontological determination of yearning is lost, and yearning takes the shape of a wish for another or a new life. Its central structural moment is a judgment that has ontological value, because it removes the character of reality from the world, i.e. it delivers an annihilating verdict on it. This is why yearning, constantly moved by suffering in a world that also grants it justification, moves itself out of the world to something different, undetermined: to a new life that is, however, only a dream-work, something void of the real. In a short story from his middle period, entitled Kristusova procesija (Christ’s Procession), Cankar even transforms the judgement of yearning, with the help of the Bible, into an eschatological judgement while depicting Christ’s Second Coming. It is this very kind of yearning as a deeroticised desire, which resembles Prešeren’s glorification of a woman and is at the same time opposed to it, that has become the paradigm of Slovene literature. In Cankar’s later works, however, suffering no longer gives yearning the final justification, and the latter, in an evidently Christian twist, becomes an in itself unjustified yearning for life after death.

The last of the larger readings is dedicated to Vodušek, who in his literary criticism revealed himself as a radical critic of both paradigms of Slovene literature, the Prešernian cult of a woman and the Cankarian yearning. Vodušek’s early poems evoke the radicalness of mysticism, which does not stem from Cankarian yearning for something indeterminable, but from passion as an ardor for God. Even so, this ardor produces unbearable sp?iritual desire, or appetite, and results in an attack on the meta-physical God that fails. Yet it is precisely its failure that engenders the exposure of passion from the authoritative form of Christian ethics which, in turn, demands the reestablishment of ethos. From that point on, Vodušek’s poetry is entangled in an ethical conflict with Christianity. This is especially visible in two sonnets where the poet focuses on the motif of Judas Iscariot, his betrayal and suicide, and the motif of Christ’s agony in the garden of Gethsemane. It is in the second sonnet that secularization, meaning a transposition to the worldly, in the immanence of the human world, becomes most radical, taking the form of the psychologization of God as the object of man’s desire: Christ’s God is revealed as a God who would simply not exist without passionate desire, the real betrayal being not Judas’, but, in the end, the betrayal of Christ’s own wish.

The smaller readings begin with a reading dedicated to Aškerc. This reading is concerned, once again, with the figure of Judas Iscariot, who, with the exception of Jesus and alongside John the Baptist and Mary Magdalene, is the figure of the New Testament that appears most frequently in modern literature. Aškerc, being the most prominent representative of Slovene libertarianism of the 19th century, was the first important Slovene author to use this figure as a motif on its own in a ballad entitled Iškarjot (Iscariot). The discussion leads to the conclusion that even though the libertarian world-view was ever more tendentiously present in Aškerc’s opus, the figure of Judas Iscariot did not attain a tendentious presentation. Other religious and historical figures were projected as the incarnation of free thought, which itself was presented as an archetypical and, simultaneously, a typificable image of divinity that multiplies in these figures.

The reading of Murn’s poetry focuses on two New Testament metaphors, “a voice of one crying in the wilderness” (Mar 1:3) and “a reed” (Mat 11:7), both found in his crisis poem of Romantic subjectivity, Ko dobrave se mrače (When the woodlands grow dark). These metaphors refer to the poetic self, the “lyrical subject,” drawing its figure in reference to the foundation on which he establishes himself as a subject − to nature. In the poem, the subject’s evocation of nature to come and reveal itself in what it is fails. But in Murn’s so-called rustic lyrics, which represent a solution to the crisis, nature ceases to be the subject’s source of subjectivity and remains the mysterious ground that is evoked, against the background of a biblical image, in its epiphanic presence. Murn’s rustic lyrics are thus a good example of how the secularization of the Bible does not necessarily result in demystification: the mystery still shines through the human world by means of epiphanies of nature.

Next in the focus of attention is Vodnik’s “New Testament cycle.” Consisting of eight poems, this cycle brings to a climax Vodnik’s poetry of revelation, finally evolving around the figure of Judas. According to the traditional Christian interpretation, Judas was led to betrayal by greed. However, the modern interpretation witnessed in European literature from Klopstock onward, has elevated Judas’s inclination towards betrayal into a high passion, the passion of God’s challenger. Yet in Vodnik’s cycle, Judas does not change into an enlightened man in the sphere of human inclinations, because he does not burn in the fire of his own passion, but in the fire of God, which, at the time of revelation, is a sign of his presence throughout the universe. In this fire Judas shows himself as “terribly beautiful”, as a part of a holy happening, the happening of the complete Other, who, according to Rudolf Otto, reveals itself in the earthly realm as mysterium tremendum et fascinans.

The reading of Kocbek’s poetry deals with a theme of history and kairós within it. As a Christian revolutionary, Kocbek depicts history as coming out of unrest, a constant motive of human action. In his vision, the course of history is a blind force, as human intentions are not directed by God’s providence, by no intention above human intentions. The place of Christ in such history is beautifully drawn in the poem Trije modri (The Three Magi): the birth of Christ is merely one of the secrets that seem to have no end in the historical horizon. In the New Testament, kairós, the time of God’s incarnation, is a central, unique, decisive historical time, but Kocbek transposes it to the second kairós, the time of man’s rather than God’s incarnation, i.e. the time of the Slovene revolution. In his poem Molitev (Prayer), he finally formulates a vision of history as man’s creation, which originates in God’s withdrawal and, even though God’s intention does not direct human intentions, will nevertheless be endorsed at the end of human (self)creation by God’s “So be it.”

In the appendix, the reading of Gregorčič’s poem Jeftejeva prisega (Jephtah’s Oath) and the Old Testament narrative about Jephtah takes as its point of departure a motif that is central to both − the motif of the non-transgressible vow. Gregorčič’s Jephtah, contrary to the biblical one, expresses guilt over the vow that forces him to sacrifice his daughter, and the introduction of guilt into the re-narration of the biblical story raises the question of its tragic aspect. In fact, Jephtah’s vow was first connected to tragic guilt by Renaissance humanism, which, in comparing Jephtah’s sacrifice with Agamemnon’s sacrifice of Iphigenia, made it an act, indeed limited by human knowledge, but nevertheless deliberate, i.e. an act that aims to bind both man and God to the realization of the vowed. On the other hand, the biblical narrative presents Jepthah’s vow as a problem by indicating its transgressivness by the repetition of Leitworte in key places. In Gregorčič’s poem, however, this vow is explicitly spoken of as a non-deliberate one, and so has nothing to do with tragic guilt, nor is it, as an act of man that aims at binding God, felt as a problem.

price
not for sale