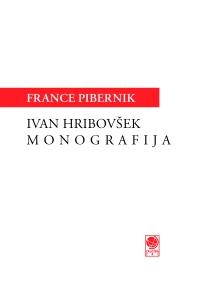 
This monograph about poet Ivan Hribovšek (1923–1945) is conceived as a study of the biographical and literary development of this writer, who died too young and after his death was recognised as one of the key figures of modern Slovenian poetry. Pibernik has taken particular care in outlining Hribovšek’s spiritual and poetic development, his inner crisis, and a difficult love drama that is unique in the history of Slovenian poetry: during the communist revolution, Hribovšek’s entire poetic opus, which existed only in a single manuscript volume, was saved from destruction by the woman whom Hribovšek loved – despite his love being unrequited, this woman alone rescued his poetry. The author of the monograph outlines the delicate psychological and existential aspects of this drama of life and poetry with appropriate empathy and insight. Thus he reveals a pulsation of poetic energy whose biographical dimension was very fragile but whose poetic side was extraordinarily vital, as even the Second World War, the author’s death and the post-war totalitarian system were unable to destroy it. After the war, Hribovšek the poet disappeared on one of the hidden mass killing fields in Slovenia, but his poetry survived the natural catastrophes of time. With these findings, Pibernik’s monograph justifiably places the long silenced poet Ivan Hribovšek in an eminent position in modern Slovenian literature.